The Police Department utilizes two Harley-Davidson fully equipped police motorcycles for traffic enforcement and general patrol work.  In addition to the obvious fuel savings, motorcycles allow the officers to navigate traffic congestion and traverse terrain that patrol cars cannot.  They are also a great public relations tool as it puts the officer right out in the public, kids love them and they are great conversation starters.  The officers who ride the motorcycles are required to pass a very difficult training program that lasts 80 hours and ends with a practical test.  Sgt. Thomas Waller is a certified motor officer instructor and conducts the training for Lower Paxton officers and other departments.  Two more Lower Paxton officers and one from Derry Township were trained by him in July at the Giant Center in Hershey with the assistance of Hershey Entertainment and Susquehanna Valley Harley-Davidson. 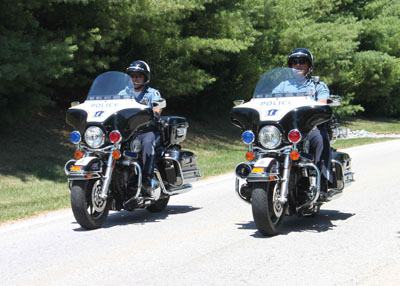 The Department also utilizes police bicycles for patrol.  Specially trained officers operate police mountain bikes that are equipped for police use.  Bike patrols offer numerous advantages. A police cyclist should be able to travel at least twice as fast as a walking or running officer by using between a third and a fifth of the amount of energy (depending on speed).  Police on bicycles also can reach areas inaccessible by car and traverse traffic gridlock more easily. Bicycles also enjoy a stealth advantage because they are quiet and tend not to be noticed. They also allow officers to be more approachable than those in patrol cars to children and other members of the community.  Bicycles are especially effective during times of extreme traffic such as Black Friday and other pre-Christmas shopping days.  Bike officers are issued inclement weather gear so they can be operated in just about any kind of weather except snow and ice. 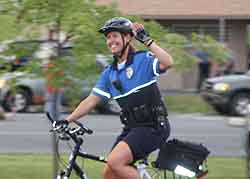