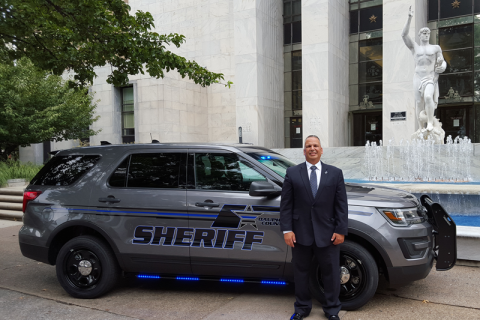 Welcome to the Dauphin County Sheriff’s “CrimeWatch” website.  This webpage is intended to provide a platform to facilitate the sharing and exchange of critical information concerning wanted persons with the citizens we serve.

Sheriff Nicholas Chimienti Jr. took the oath as the new Sheriff of Dauphin County on January 4, 2016.  During his tenure as Sheriff and as a State Trooper before that, Sheriff Nick cultivated trusted relationships with each of the federal, state and local law enforcement agencies working throughout Dauphin County and beyond.  He is extremely proud of the men and women appointed as Deputy Sheriffs, all of whom are dedicated to serving the citizens of Dauphin County with honor and distinction.

The Sheriff is elected to a four-year term and is charged with wide-ranging duties including the statewide transportation of more than 10,000 adult and juvenile prisoners each year who are scheduled to appear in Dauphin County courtrooms for criminal trials, criminal hearings, and civil court proceedings. Your Deputy Sheriffs are tasked with duties such as safeguarding and maintaining order in all Dauphin County Courtrooms; serving both criminal bench warrants and civil court documents (such as Protection From Abuse Court Orders, Custody Orders, Eviction Orders, etc.); and the execution of Sheriff Sales of Real Estate. Additionally, Sheriff Nick issues “Concealed Carry Permits” to qualified citizens wishing to carry a concealed weapon and he serves on the Dauphin County Prison Board, which sets forth County Prison Policy.

Sheriff Nick has long been a proponent of staying current with the latest law enforcement trends and cutting edge technology. In less than 2 years as the Sheriff, he has already upgraded an aging vehicle fleet, deployed a new software system designed to improve criminal warrant service efficiency and productivity, and replaced the Department’s 10-year-old duty weapons with brand new pistols.