The Swatara Township Board of Commissioners authorized the formation of a police department on March 7, 1913 with the enacting of Ordinance #6. The Ordinance provided that: “A police force, consisting of not more than five qualified electors of the Township, be appointed from time to time, each to receive $5.00 per month and their duties to be, to arrest all vagrants and all persons who have violated the Criminal Laws or the Ordinances of the Township.

This Ordinance stayed in effect until July of 1950. In 1950 the population had grown to 9,350 persons and the Board of Commissioners took steps to organize the first full-time Police Department.  Anton Maaske was appointed as the first Police Chief, the first police car was purchased, and a Civil Service Commission and Police Pension Fund were created. By 1952, the Department had grown to eight full-time officers. Officer Benjamin Young III is depicted in the photograph below. 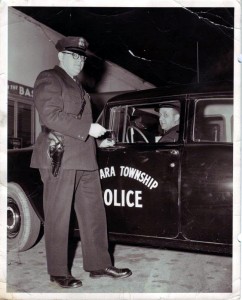 As of  May 2018, the Department has a compliment of 48 sworn officers, a volunteer Police Chaplain and three clerical staff employees. Swatara Township Police Officers are dedicated to advancing our core values through self-less service. Our core values are: Duty, Honor, Courage, Integrity, Respect, Caring, and Loyalty. Our Swatara Township Police Officer creed epitomizes our commitment to public safety and accountability to those we serve.

On January 1, 2015, the Swatara Township Police Department began providing full-time police services to the neighboring Borough of Paxtang which is home to approximately 1600 residents and encompasses .4 square miles. As of the writing of this, we are the only department in Dauphin County to provide contracted police services.

Swatara Township Police Officers respond to approximately 20,000 incidents per year. The Department embraces the community policing philosophy along with a strong enforcement presence and seeks to build positive relationships and partner with community members to reduce the opportunity for criminal activity and prosecute criminal law violators.  We are committed to embracing new technology to work smarter and more efficiently.  To these ends the Department has both a dynamic physical presence and web presence in the community. The Department utilizes foot patrols, bike patrols, motorized patrols, and directed patrols. On the world-wide web the Department has a strong presence through the Swatara Township Police Crime Watch portal (https://dauphin.crimewatchpa.com/swatarapd/3028) which is part of the larger Dauphin County Crime Watch portal (https://dauphin.crimewatchpa.com/).   Through the web portal the Department has a strong presence on social media sites such as Facebook and twitter and the portal allows citizens to subscribe to it for automatic news alerts concerning Police activity.  The web portal also provides citizens access to crime mapping tools (http://www.raidsonline.com/ ) which allows them to stay informed about crime trends in their communities.

The motto emblazoned on our Township Coat of Arms sums up our belief in the virtues of service. Servitute Clarior – More Illustrious by Serving!