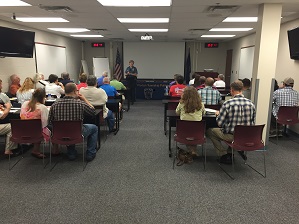 Academy participants have the opportunity to interact with Lower Paxton Township Police Officers and officials from other agencies while becoming familiar with the way police officers perform their duties.  Topics include but are not limited to the testing and hiring process for officers, accident investigation, patrol techniques, evidence collection and retention, and criminal investigation.

Applications can be obtained at the Lower Paxton Township Police Department and can also be downloaded below.  Questions can be directed to the Community Policing Unit at 717-657-5656.

The LPPD generally holds a citizen's academy every year starting in February and concluding in May.  If you are interested, get your application in early as seating is limited.